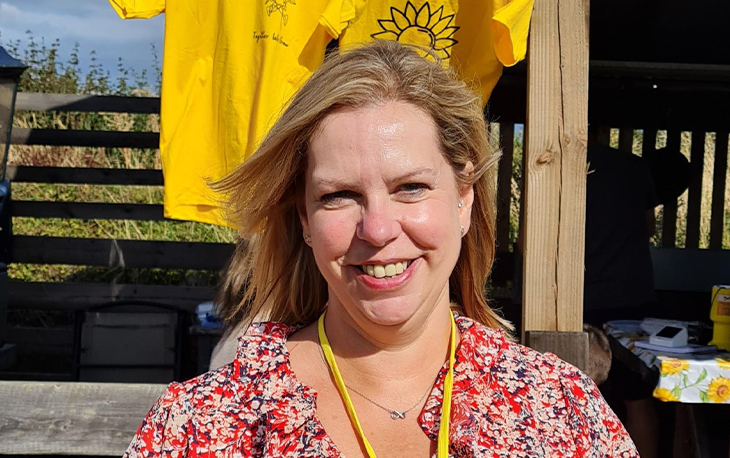 Funeral Director Alison Edwards at Michael Gamble Funeral Directors in Stonehouse, Gloucestershire, has been accepted as a volunteer and befriender with Sunflowers Suicide Support, a local registered charity which offers support for people who have been bereaved by a suicide.

Alison recently completed an eight-week Grief Recovery Course as she has personal experience of loss by suicide. The course has also been helpful in her role as a Funeral Director.

Alison went on to complete a two-day training course called ASIST (Applied Suicide Intervention Skills
Training), which teaches participants to recognise signs when someone may have thoughts of suicide and work with them to create a plan to support their immediate safety.

Alison said: “I lost my brother David to suicide, he was 32 years old and was suffering from PTSD. He had served aboard HMS Antelope during the Falklands War, which was hit two days after arriving to protect the island. He never really spoke about the Falklands and suffered in silence.

“Ten years after the war and coupled with the breakdown of his marriage, he took his own life. He was my hero and his loss has had a profound effect on me. I never really spoke about his death and how I felt losing him and the loss never got any easier.

“However, with the help of Sunflowers and their Grief Recovery Course, 30 years later I feel comfortable talking about him. I’ve said goodbye to the pain of losing him but I’ll never say goodbye to him.

“Sunflowers is an amazing team run by people affected by suicide. They have been such a comfort and support to me that I wanted to give something back.

“Sunflowers is a practical support service, not a counselling service, so families do not feel overwhelmed and alone. We hope this will give a glimmer of hope for the future.

Alison and her colleague Dee Paoletti have also completed training with the Alzheimer’s Society to become Dementia Friends. Their office is now recognised as a safe space for anyone struggling with dementia.

Have you found what you are looking for today?

Be Kind this Christmas